The big questions come up as life draws to a close: what really matters? What should I have done better? If you put these questions to people on their deathbed, you will always hear the same five answers. Sometimes the young should listen to the old.

All you have left at the end are relationships.

“Non, rien de rien, non, je ne regrette rien”, sang Edith Piaf, France's most famous singer, when she was terminally ill in 1960: “I have no regrets”. The song garnered worldwide attention. Three years later Piaf died of cancer and cirrhosis of the liver, aged just 47. The American Frank Sinatra struck a similar tone when contemplating mortality in his worldwide hit “My Way”: “Regrets, I've had a few. But then again, too few to mention.” Looking back on life free of regrets and feeling fulfilled when death is near is a fortunate position to be in

Not everyone looks back on life in the same way as Edith Piaf or Frank Sinatra. Bronnie Ware knows more than most about the thoughts, fears and doubts of the dying. The Australian nurse spent a long time working in palliative care, so she was often with patients during the last three to twelve weeks of life. She knows what preoccupies the dying: “Each experienced a variety of emotions as expected – denial, fear, anger, remorse, more denial and eventually acceptance. Every single patient found their peace before they departed though, every one of them”. 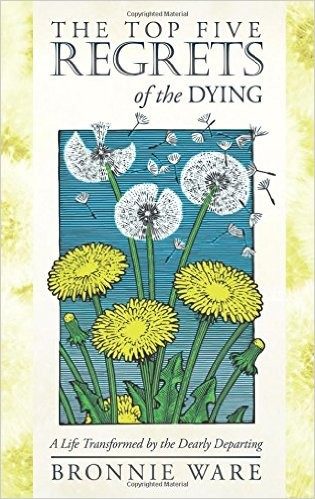 The Top Five Regrets of the Dying

Bronnie Ware also often asked dying patients about any regrets they may have had or how they could have done things better. Interestingly, the answers tended to centre on the same topics. This led to Ware writing a book “The Top Five Regrets of the Dying: A Life Transformed by the Dearly Departing”, which became a bestseller and was translated into 29 languages.

Bronnie Ware's work in palliative care has had a lasting effect on her own life.  “I express myself much more clearly now,” she says. “I also regularly ask myself whether I will come to regret a decision. If the answer is yes I have to find another way.”

This point also comes out in her conversations with the dying: there is a common thread running through all five unfulfilled wishes. People can decide for themselves and it is up to us how we live our life.

Even if the wishes initially come across as truisms, Ware’s book suggests that they are often put off for too long in the hustle and bustle of everyday life.

Sometimes all you need to do is listen to old people’s advice while there is still time to act on it.